We have about 45 different jingles which you will hear during our broadcasts. If its a piece of carefully constructed abstract noise its probably been made by Mark Vernon. If it features samples from seventies sitcoms then it will have been haphazardly cobbled together by Barry Burns. And if its a beautifully crafted piece reminiscent of the glory days of the Radiophonic Workshop then it will have been made by Jez Butler of The Twelve Hour Foundation.

Here’s Jez on his inspiration: “Having heard John Baker on a Woman’s Hour interview from 1968, explaining how he created the sounds to create his radio jingles I decided to use a sampler to create the same palette. The results were surprisingly close, so I took the idea further and created an album, each piece taking between 1/2 hour and 2 hours to write and record. All tracks (apart from the electronic demos) were created using nothing but homemade samples of household objects being struck, blown or ‘twanged’. Track 10 comprises nothing but sounds made by the human body”. The lighter side of concrete. 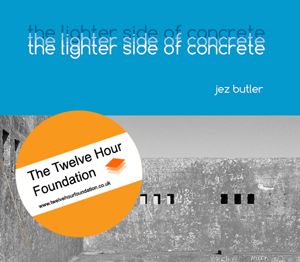 Listen and find out more about Jez’s work here:

Thanks are also due to the voices on our jingles Rosie Blass, Richard Blass and Jenn Mattinson