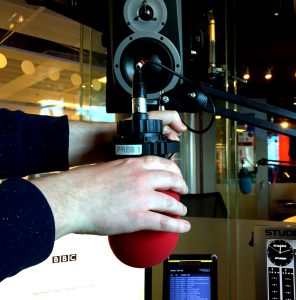 To bring our week long broadcast to a close we present a new piece by Robin the Fog, produced especially for Radiophrenia – ‘Mount Shock – Music for Microphone Cradle’ will be aired at approximately ten to midnight tonight.

This composition is created from a single recording of a creaking microphone cradle in the BBC’s New Broadcasting House. Cracks have already begun to appear in this recently opened state of the art complex, but from this unwanted disturbance to an acoustically treated environment a surprisingly rich and harmonious accidental soundscape has emerged. Five copies of this recording were played back simultaneously, each with slightly different adjustments in pitch so that they fell in and out of sync with one-another, creating random melodic and harmonic patterns. Other than some judicious editing, no computer effects or artificial reverb have been used.

Robin The Fog is a sound artist and radio producer whose work blurs the boundary between documentary, musique concrete, and field recording, both independently and as part of the reel-to-reel tape wrangling duo Howlround. His biggest fear is being swallowed by a python, though being based in London he admits the contingency is a remote one.