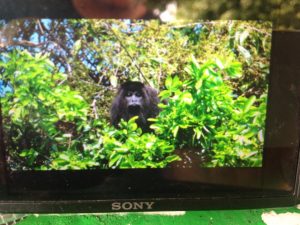 On mainstream radio certain pieces of music are played regularly at specific times. This is a way of quickly identifying which station you’re tuned to and as a way of marking the time.  On Radio 4 for example, think of Sailing By with its repetitive and somehow reassuring tune, played every night at 00:45. Here on Radiophenia we have our own station idents that will play each day at midnight and midday. These are recording of howler monkeys made by Stephen Hurrel. He says:

“These are recordings I made whilst travelling down the Usumacinta River in Mexico – on a Clipperton expedition last year. The howler monkeys create an amazing deep, primal growling, scraping sound that seems to travel across distance within the forest. The monkeys themselves are quite small but their sound is big. These sounds happen at dawn and at dusk. It’s a way of communicating their territory; Male howler monkeys use their big voices to defend their turf. Howls by one troop are answered by other males within earshot. Every-one starts and ends the day by checking out where their nearest competitors are. In this way, they protect the food in their territory. It’s an important job because their diet is made up mostly of leaves—not a particularly nutritious food. Finding young, nutritious leaves is a priority”.

These recordings, introduced by Nerea Bello, will be played at dawn and dusk – but MEXICO time – so that it synchronises with the activities of the howler monkeys. Mexico is 6 hours behind so 6am would be noon UK time and 6pm midnight. It’s a way of making a conceptual real-time link with another place in another part of the world, other kinds of activities and as a reminder of what’s happening in the natural world.